Project milestone celebrations are always special, but the recent Topping Out Ceremony at Oran Park celebrated the towns first standalone commercial building and raised funds for a worthy cause.

To mark the completion of the structure on the future TRN House building, Greenfields Development Company, TRN Group and the wider project team joined RCC to see the ceremonial tree craned onto the roof slab.

Our Project Manager, Michael said that being able to share the day with wife and daughter was a hallmark of the collaborative environment and culture on the project;

“Greenfields Development Company share RCC’s family values and it’s rewarding to be working with them, the entire consultant and subcontractor team and the local community so collaboratively”.
Michael Ryan

TRN House will stand alongside the existing Oran Park Podium retail and commercial precinct and will be the latest addition to Oran Park Town’s growing commercial hub.

The event was also an opportunity to promote Pink Up Oran Park, a breast cancer awareness and fundraising campaign supporting the McGrath Foundation, which has seen several sites across Oran Park Town turning a shade of pink during the month of October. As the ceremonial tree was craned onto the roof of the UTS Central project, RCC, UTS and our consultant team acknowledged the collaborative approach responsible for reaching this milestone.

Joined by FJMT and Lacoste & Stevenson, we took the opportunity to soak up the sunshine and appreciate the contribution this landmark development will make to UTS staff and students and the broader Sydney community.

With an average of 380 workers on site each day for the last 159 weeks, the current progress represents the hard work of many individuals, operating as a team to deliver this impressive new home for UTS staff and students.

Well done to the entire RCC, subcontractor and consultant team who have worked incredibly hard to complete the structure on this complex development. 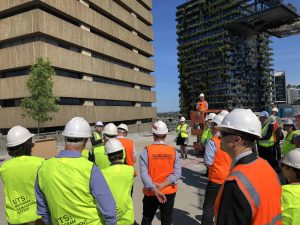 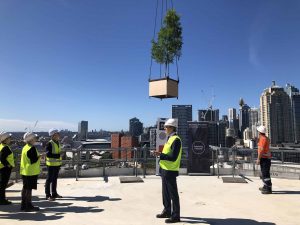 Want to know more about the UTS Central project? The UTS Central Project includes the redevelopment of Building 2 and the extension of Building 1 (UTS Tower) to redefine the main campus entrance. The development represents a significant component of the broader UTS Master Plan and will create additional connections within the campus and further enhance the student experience, supporting UTS’s long-term strategic plan of growth in research and positively contributing to the urban quality of the precinct. RCC met University of Sydney staff on the level 9 roof slab of the Regiment building yesterday to celebrate completing the structure! We took a moment to reflect on what has been achieved since breaking ground 6 months ago, as the ceremonial tree was craned onto the roof slab.

The only thing more impressive than the rooftop city views is the 650 tonnes of steel, 19,5000m2 of formwork and 6.650m3 of concrete that went into the structure! That’s enough concrete to full up an Olympic swimming pool twice! 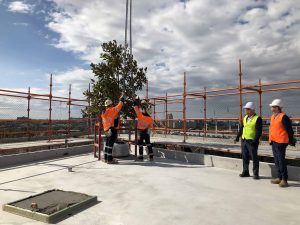 To be completed in February 2019, the new development will offer affordable student accommodation, community facilities and teaching spaces.

The new $68.6m mixed use redevelopment will consist of: Topping out celebrations for the St Leonards Clinic project were carried out on site with a lunch as the traditional tree was lifted onto the completed structure. Ramsay Health Care and Northside clinic staff as well as several doctors and nurses who will use the facility attended, and it was our pleasure to provide them with a site tour and take them through the prototypes for the future clinic bedroom with ensuite and doctors consult room.